It takes a bit of technical work, but setting up an external graphics card can transform your laptop into a powerful gaming machine for a fraction of what a new PC would cost.

Many with aspirations to spend more time on a computer playing games always run into a major problem: The only PC they have is a laptop with weak graphics. which is simply not enough to play decently.

Sure, your machine might work for titles like Diablo III with some little stuttering moments on your laptop screen, but forget about graphics-intensive games, do it on an external 1080p screen.

And this is where we want to help you. We think that if it is possible to have an external hard drive, why not an external graphics card?

Some people have. There are even some companies that make their own external graphics card (eGPU) housings like Alienware, MSI, and ViDock. But these eGPU kits tend to be too expensive, or use proprietary connection technology.

This is why most of the eGPU gaming world relies heavily on homebrew designs.

The good news is that many people who go the personal route end up with a plug-and-play experience that requires little to no modification, but to get to the plug-and-play part, you have to do a little research.

But when you're done, you'll have a configuration with performance comparable to a gaming console, cheaper than a new Xbox One, depending on the graphics card you choose.

Before you start, you should know a few terms. Without having a basic vocabulary of the eGPU world, some confusion can arise, fast. For veterans at these jobs, there isn't much to see here, and you can skip to the next section .

PCIe x16: PCI Express (PCIe) are the standard slots where a graphics card plugs into one of the motherboard. The "x16" part means the PCIe slot has 16 lanes where data can travel. With an eGPU setup you typically compress a x16 slot to a x1 (1 lane) or x2 (2 lane) connection for the laptop. That sounds bad, but it works surprisingly well. PCIe slots come in three generations: 1.0, 2.0, and 3.0. PCIe 4.0 is in development, but not expected until 2017. Most of the new graphics cards will run on PCIe 3.0, backwards compatible with version 2.0.

PCIe connector: PCIe can refer to a type of power connector with six or eight pins.

ATX 24-pin: This is another type of power connector that is commonly used with PC supplies, and it is one of the power options in PCIe adapters.

PCIe adapter: This is a small board with a PCIe slot, some HDMI slots, and a ton of power options. The sole purpose of the PCIe adapter is to help the graphics card communicate with the laptop.

Express Card Slot: This is the place on your laptop that is reserved for wireless broadband cards from a mobile operator.

mPCIe: This is an interface that some eGPU enthusiasts use to connect their graphics card to their laptop instead of using an ExpressCard. It offers a better connection, but it can be a hassle because most of the mPCIe slots are inside the laptop.

Thunderbolt: Intel's fast connection technology is also an option for connecting an eGPU. Windows laptops don't typically offer Thunderbolt ports, but many who have used eGPUs on MacBooks report a great experience thanks to using a Thunderbolt connection.

BIOS: This is the program that starts first when the computer starts up. It is usually accessed by pressing F2, another F key, or a special button on your laptop. The BIOS controls a variety of options for your PC including, for example, the boot order.

Frames per second (fps): This is a basic measure of how well a game runs on a given system. The ideal standard for PC gamers is 60fps, although 30fps is considered perfectly playable. Many "next gen" games are running at 30fps.

Basic components of an eGPU

A typical eGPU setup requires five basic elements: a laptop, a desktop graphics card, an external display, a PCIe adapter to put the card in, and a separate power supply for the graphics card. You may also want a cooling base if you're going to play more graphics-heavy games, like Witcher 3. LOWER THE TEMPERATURE OF YOUR GRAPHICS CARD 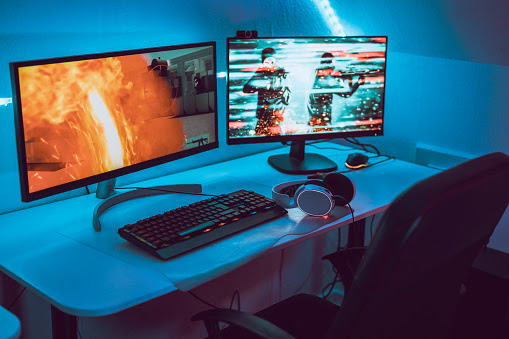 I need a graphics card ... which one to CHOOSE?

A graphics card!  Okay, we're exaggerating a bit: maybe you know what a graphics card is, but maybe you also don't know what makes it up? Here are some rules to know: Not all PCs have a graphics card!  If your computer is intended for office use (or in any case not very graphic), a GPU (G = "Graphics") already integrated in any processor is more than sufficient.  And some can be very successful! A graphics card is made up of different elements: 1- A graphics processor, which determines the frequency (expressed in MHz or GHz) and the fineness of the engraving of the electronic elements…  2- Its RAM ranging from 1 to 32 GB and using different names (GDDR5, GDDR6, etc) 3- Its cooling, which can be replaced or multiplied by other additions of  fans  or water cooling… (useful for large graphics cards really in demand!). NVIDIA vs AMD: War of the Titans  There are two manufacturers of graphics cards in the world:  Nvidia  and  AMD  , two brands with different qualities to

How to properly install a graphics card in your PC

To be sure that the graphics card will work well in your PC, you have to find the right connector on the motherboard and remove certain elements from the case.  We guide you through this important phase. For gamers, the graphics card is an essential element and it must be chosen with care, but also to ensure that it is properly installed in the case and especially well fixed to the motherboard.  Here are our tips: If necessary remove the protective stickers placed on the fans of the graphics card. If you touched the connectors on the card with your fingers, use a paper towel lightly dampened with alcohol to remove any traces of grease. Connect the graphics card to one of the PCI Express 16x sockets on the motherboard.  These sockets have the longest connectors.  If you have a choice of two takes, take the higher one. The box is fitted with strips which serve as protective covers.  To determine which ones to remove, position the graphics card on the connector and see which strips corr